On Thursday, July 24, 2014, Ginger Martin had the privilege of sharing her journey as a female CEO of a National Bank with a group of female Directors and Senior Directors at Walmart Corporation in Bentonville, AK. The meeting took place via video conference at the Walmart Florida Division Doral office. The Walmart women participating in the meeting were members of the Walmart Female Mentors Circle. The members of the Mentor’s Circle participate for 2 years and are selected based on their leadership potential.

The ANB team presented our President and CEO, Ginger Martin, with a banner commemorating her successful completion of The Freedom Climb 2014.  Ginger climbed to the summit of seven mountains in Colorado over 14,000 feet in elevation in four days.  The Freedom Climb objective is to stir compassion, action, and advocacy on the issues of modern day slavery, exploitation and trafficking of women and children globally.  To learn more about The Freedom Climb go to http://www.thefreedomclimb.net. 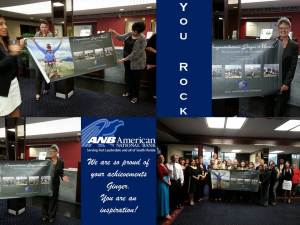 The ANB team honors Ginger Martin with a collage for her successful completion of The Freedom Climb 2014.